Before the start of the six handed Final Table, all remaining players agreed on a deal based on their Chip Counts and ICM, this helped to speed up the play tremendously because otherwise it would have been very tricky considering the huge gap in prize money between first and second play. Peter Linton started as Chipleader and the first spectacular setup saw the Aces of Jakub Michalak getting cracked, he returned the favor by doubling up through Linton with A♦ Q♦ when he completed a backdoor Straight with the K♥ on the River.

The Pole also took Chips off Gwendoline Janot when the Frenchwoman picked the wrong timing to bluff with Jack high and had to give up on the Turn. Peter Linton six-bet shoved into Michalak before we lost the first player and that specific scenario would play an important role later on. After a raise from Alban Juen, Gwendoline Janot three-bet shoved for 2.9 Million before table neighbor and fellow French Xavier El Fassy also moved all-in for 2.1 Million to double up with K♠ K♦ versus 7♦ 7♠ and leave Janot with only 5 Big Blinds.

In the very next hand, Gwendoline Janot moved all-in preflop for 5 Big Blinds and Jakub Michalak in the Big Blind made the call with A♦ 2♥ to reduce the field to five after dominating 10♦ 7♥. It would not take long to see another all-in and a call, this time Alban Juen was at risk after three-betting and calling the four-bet shove of Peter Linton with J♠ J♦. He was flipping against K♠ Q♠ and the Board 3♥ K♥ Q♥ 3♣ K♣ sent him to the rail in fifth place.

Back to the clicking war between Jakub Michalak and Peter Linton it was to strengthen the position of the Polish Chipleader after five-bet shoving K♦ J♣ and Linton snap calling  within one second and tabling Q♣ A♦. It was an 18 Million pot and Lady Luck did not shine on the Brit with the Board running out K♥ 8♠ 9♣ J♠ 5♠ to give Michalak two pair and 28 Million in Chips.

He would also knock out the other two contenders for the additional payday of 200,000€ for finishing first. After min-raising the Button, Nick Hicks defended his Big Blind with A♥ 4♥ and found top pair on the Flop A♣ 2♠ 2♥ to check-call 350k from his opponent. On the Turn 8♥ Jakub bet 1.1 Million and was again check-called before the remainder of the stack went in once the 6♠ appeared as final community card. Jakub tabled 2♦ K♣ in showdown and went into Heads-Up with an overwhelming lead.

The final duel would only last a couple of hands and the Chips went in preflop via four-bet shove from Michalak and the snap call from Xavier El Fassy. The Frenchman flipped over K♦ K♣ and was in great shape to start a comeback, however A♠ 7♣ would find two Aces on the Board A♥ J♥ 3♣ 4♦ A♣ to crown the first ever ISPT Champion in Jakub Michalak from Poland. Xavier El Fassy takes home 204,000€ after the six way deal before the Final Table and Michalak receives 436,000€ (236,000€ after deal + 200k for the win). 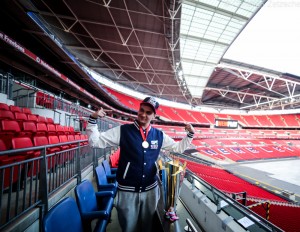 The official payout including all numbers from the deal is as follows: